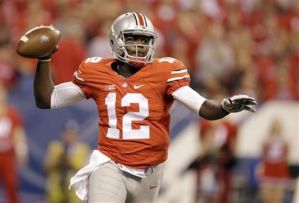 Buckeyes 3rd string QB Cardale Jones threw for 3 touchdowns and led his team to a win over Wisconsin in the Big Ten Championship.

All last week, there was one name that was on the lips of college football fans. Cardale Jones. Two weeks ago, very few people had heard of him, but after losing Braxton Miller and J.T. Barrett to season ending injuries, the Ohio State Buckeyes were forced to put all their hope into their 3rd string QB, Cardale Jones. The 5th ranked Buckeyes were underdogs against the 13th ranked Wisconsin Badgers. The Badgers were a hot team and could rely on Heisman candidate, Melvin Gordon, who was leading the nation in rushing. It seemed that the Buckeyes had little hope of winning and getting into the playoffs.

Ohio State put all those doubts away on the first drive of the game. Using a mixture of running and passing plays, they moved the ball to the Badger 39 yard line, then Jones struck. He completed a 39 yard TD pass to receiver Devin Smith to give the Buckeyes a 7-0 lead. That was a lead they would never give up the rest of the game. After trading punts, running back Ezekiel Elliott hit a hole up the middle and raced 81 yards to give the Buckeyes a 14-0 lead.

In the second quarter, the Buckeyes tacked on a field goal, then Jones struck again with a 44 yard TD pass to Smith to give his team a 24 point lead. On their next possession, Elliott ran it in from 14 yards out, then defensive end Joey Bosa closed out a big half by returning a fumble 4 yards for a touchdown to give his team a 38-0 lead at the half.

In the 3rd quarter, Jones connected with Smith for the third long TD of the game, this one from 42 yards out and in the 4th quarter, running back Curtis Samuel got a couple of garbage time TD’s to make the final score 59-0.

The big win was just what the Buckeyes needed as they claimed the #4 spot in the playoffs. I know it’s only one game, but you can’t say enough about Cardale Jones. In his first start, the kid looked poised and unflappable and his deep passes are a thing of beauty. You have to give credit to Urban Meyer and his coaching staff to recover from not one, but two season ending QB injuries. In this era of the transferring quarterback, not many teams could survive if they had to go with their 3rd string QB. You also have to give credit to Jones, who played with ice water in his veins. Not many players are able to start their first game in a conference championship game and play the way he played. So now the question is, was this a one game fluke or can Cardale Jones keep it up against Nick Saban and the Alabama Crimson Tide? We won’t know the answer to that question until New Year’s Day.

Cardale Jones, QB, RS Soph (6-5, 250): Was the 3rd string QB in September. First career start. Big body. Impressive arm strength and throws a pretty deep ball. Teammates call him “12 gauge” because of his arm strength. Showed great poise on a huge stage. Has improved his accuracy. Showed a good ability to check the ball down to his 2nd and 3rd receivers. Protects the ball. Doesn’t have great speed, but runs with power. Takes on tacklers. Good football IQ. Throws well on the run. Completed 12 of 17 for 257 yards and 3 TD. Ran 8 times for 9 yards.

Devin Smith, WR, Sr (6-1, 197): #2 all-time at Ohio State in TD receptions. Good size. Adjusts well to the ball in the air. Uses his body to box out defenders. Has the speed to be a game breaker. Gets good yardage after the catch. Has the ability to climb the ladder and make catches above defenders. Had a great game with 4 catches for 137 yards and 3 TD’s which were all 39 yards or longer.

Jeff Heuerman, TE, Sr (6-5, 255): Great size. Good blocker. Doesn’t get many targets, but has soft hands and can make plays in the passing game.

Taylor Decker, LT, Jr (6-7, 315): Has the size you like for a left tackle at the next level. A two year starter and was the only returning starter on the offensive line this year. Has played on both the left and right sides. Was called for a false start penalty.

Darryl Baldwin, RT, Sr (6-6, 307): First year starter. Can dominate at times in the running game. Does a good job blocking down. Threw a key block on the 81 yard TD run.

Michael Bennett, DT, Sr (6-2, 288): Lacks great size for an interior player. Does a good job stacking up the middle of the line. Deceptive speed. Can move outside to rush the passer. Wisconsin had no answer for him. Had 5 tackles, 4 tackles for loss, 2 sacks, and 2 forced fumbles, one of which was returned for a TD.

Adolphus Washington, DT, Sr (6-4, 295): Gets quick inside penetration. Pursues all the way to the sideline. Had 4 tackles and 1 tackle for loss.

Doran Grant, CB, Sr (5-11, 193): 2014 All Big Ten. Good man cover corner. Uses good technique to knock the ball away. Uses the sideline as 12th man. Jumps routes. Stays in good position. Had 3 tackles and 2 pass breakups. Picked off 2 passes, one of them in the red zone and returned them 60 yards.

Joel Stave, QB, Jr (6-5, 225): Tall and lanky. Game manager that needs his running game going to be effective. Is not the guy you want dropping back and throwing on every down. Stats don’t blow you away, but is 7-0 this year after taking over as the starter. Has a long delivery. Struggles with accuracy and relies on play action fakes for his effectiveness. Buckeyes defense threw his timing off. Only completed 17 of 43 for 187 yards and was picked off 3 times.

Melvin Gordon, RB, Jr (6-1, 207): Heisman finalist and Big Ten Offensive Player of the Year. Leads the country in rushing with over 2,300 yards. Had 10 straight games of over 120 yards, but was held in check by the Ohio State defense. Speedy and has good burst through the hole. Great acceleration. Became bigger and stronger this year to handle a bigger rushing load. Great vision and balance. Keeps his legs churning after contact. Was held to 76 yards on 26 carries.

Alex Erickson, WR, RS Soph (6-0, 198): Former walk-on that has become Badgers go to receiver. Dependable receiver that moves the chains. Uses hands to snatch the ball from the air. Willing to lay out to make the catch. Led the team with 7 catches for 83 yards.

Kenzel Doe, WR, Jr (5-8, 170): Small and quick. Dynamic with the ball in his hands. Great speed and athleticism. Follows his blockers and is tough to bring down. Runs nice routes. Has good footwork along the sideline. Is used as a receiver, on jet sweeps and returning punts and kickoffs. Had 3 catches for 41 yards and 1 carry for 6 yards.

Tyler Marz, LT, Jr (6-5, 321): Battler in pass protection, but may not have the athleticism to play on the left side at the next level. Can be beaten by the speed rush.

Dallas Lewallen, G, Sr (6-6, 320): Very versatile. Has played left tackle and guard and then moved to center in this game after an injury.

Rob Havenstein, RT, Sr (6-8, 333): Massive right tackle that can be a dominant run blocker. Battles in pass protection, but had his hands full against Joey Bosa.

Marcus Trotter, ILB, Sr (6-0, 226): Undersized inside linebacker. Runs well to the ball. Gives good inside/out pursuit. Does a good job playing downhill and stopping ball carriers in the hole. Led the team with 10 tackles and 1 tackle for loss.

Vince Biegel, OLB, RS Soph (6-4, 244): Good size and athleticism. Quick off the edge. Plays good containment and turns plays to the inside. Had 1 tackle.

Darius Hillary, CB, Jr (5-11, 188): Badgers best cover corner. At times can get called for penalties because he doesn’t look back for the ball. Had 5 tackles and was called for a pass interference penalty in the end zone.

Come back next Wednesday as I discuss another of the big games from this weekend. If you like what you read, like us on Facebook and tell your friends. See you next Wednesday!