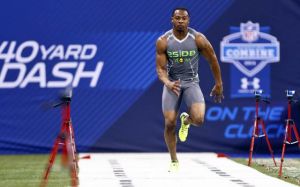 The 2014 NFL Combine is now in the books. We will give recaps of the players that made money by improving their draft stock. Today we move on to day four of the Combine when the defensive backs were on display. These workouts were the last of the 2014 NFL Combine.

You hear almost daily…. the NFL is a passing league. Many teams use three receivers as their base set and on 3rd down, they may employ four or five receivers. Add to that the teams that like to use multiple tight ends that they line up all over the place and it’s not hard to understand why you can’t have enough defensive backs. You will never hear a team say they have enough corners. If you have two, you need three. If you have three, you need four. Safeties have also become more important, especially if they do a good job in coverage of tight ends. Safeties that can cover the receiver in the slot make your base defense even more effective since you don’t have to bring an extra corner on the field.

My notes on the defensive backs that worked out on day four:

Ha Ha Clinton-Dix – Alabama – S – (6-1 208 lbs.): Natural deep safety that understands angles and keeps the ball in front of him. Has good range. Flips his hips and changes direction well. Has the ball skills to read the quarterback and go after the ball in the air. Some question his ability to cover slot receivers man for man, but I believe he can handle that.

Darqueze Dennard – Michigan State – CB – (5-11 199 lbs.): Physical, aggressive press corner. His nickname is “No Fly Zone” because he takes on the opponent’s best receiver and shuts them down. Nice, low backpedal. Is a little bit stiff when he transitions out of the backpedal.

Kyle Fuller – Virginia Tech – CB – (6-0 190 lbs.): Has good route anticipation. Does a good job in off coverage. Quick feet. Is a little too high in his backpedal. Has ability to cover slot receivers. Has good instincts and is always around the ball. Broad jumped 10’8” (tied for #3 DB).

Phillip Gaines – Rice – CB (6-0 193 lbs.): Came into the draft process as a relative unknown, but has improved his draft stock with good showings in the Senior Bowl and the Combine. Has good length and long arms. Very smooth backpedal. Very smooth transition out of his backpedal. Tracks the ball well in the air. Ran a 4.38 40 yard dash (#2 DB) and 6.63 3 cone (#3 DB).

Andre Hal – Vanderbilt – CB (5-10 188 lbs.): Quick change of direction skills. Adjusts well to the ball in the air. Smooth transition out of his backpedal.

Stanley Jean-Baptiste – Nebraska – CB/S – (6-3 218 lbs.): Very intriguing prospect. Played receiver, corner and safety for the Cornhuskers. Very raw, but has very good athleticism. If he is able to play corner, he will be one of the biggest corners in the NFL. Fits the mold of the Seahawks corners. Very good lower body explosion. Vertical jumped 41.5” (#1 DB) and broad jumped 10’8” (tied for #3 DB).

Lamarcus Joyner – Florida State – CB/S (5-8 184 lbs.): The exact opposite of Jean-Baptiste in regards to size. Has played both corner and safety. Some scouts do not like him because of his height, but he is a playmaker that is always around the ball. Has the ability to cover slot receivers. Quick feet. Plays a little bit high in his backpedal. I think he should be able to play safety at the next level and will bring the flexibility to cover slot receivers.

Craig Loston – LSU – S – (6-1 217 lbs.): Physical safety that is better in the box than playing deep. Does a good job flipping his hips and changing direction. Tracks the ball well in the air. Has short arms. Made the secondary calls for the Tigers and is able to get everyone lined up in the right spot. Has the ability to be a gunner on the punt team.

Bradley Roby – Ohio State – CB (5-11 194 lbs.): Very athletic. Was rated in the preseason by many as the top corner. Had an inconsistent year, struggling at times. Great balance. Has loose hips that allows him to change direction very quickly. Quick feet. Able to play off the receiver and still make plays on the ball. Ran a 4.39 40 (#4 DB).