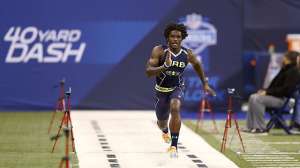 The 2014 NFL Combine is now in the books. We will give recaps of the players that made money by improving their draft stock. Today we continue on day two of the Combine when the skill players were on display. The last group to compete on day two were the running backs.

The value of the running back position has changed over the years. Gone are the days when a running back might be the first overall pick. In the 2013 draft, for the first time in 50 years, a running back was not selected in the first round. The truth remains, however, that you have to be able to run the football to keep defenses honest. Running backs can also be a critical part of the passing game if they can catch the football and pick up blitzes. If you want to be a successful NFL team, you still need good running backs to help you move the ball.

My notes on the running backs that worked out on day two:

J.C. Copeland – LSU – (5-11 271 lbs.): Former defensive lineman that moved to fullback his junior season. Blows up defenders in the run game. Has softer hands than you would think and is surprisingly nimble on his feet. Had 23 bench press reps (#4 RB).

Timothy Flanders – Sam Houston State – (5-9 207 lbs.): Led his conference in rushing all 4 years and is a 2 time Southland Conference Offensive Player of the Year. A strong lower body with a low center of gravity. Good outlet receiver. Very nice feet. Able to make moves that will remind you of Barry Sanders. Doesn’t have great speed (4.75 40 yard dash), but is extremely quick.

Jeremy Hill – LSU – (6-1 234 lbs.): Big, powerful back that likes to get north-south in a hurry. Has quick feet for a back his size. Has a slashing running style and has the ability to spin out of tackles. Doesn’t have great top end speed (4.66 40 yard dash). Looked good running pass patterns downfield.

LaDarius Perkins – Mississippi State – (5-7 195 lbs.): Good straight line speed. Runs bigger than his size. Good acceleration and quick burst. Has a darting running style. Has to slow down to make his cuts. A little bit tight in the hips. Ran a 4.46 40 yard dash (#5 RB).

De’Anthony Thomas – Oregon (5-9 174 lbs.): Rail thin. Ran a disappointing 4.50 40 yard dash. Outstanding quickness and very good acceleration. Hits the hole quickly and makes his cuts at full speed. Dangerous in the open field. Finds creases and explodes through them. Won’t be able to take a big workload due to his size. Has the ability to return kicks.