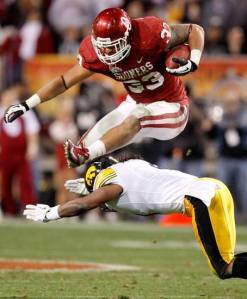 We continue our series on the top draftable players entering the 2013 season.  Today we discuss the fullbacks. Many NFL teams look at the fullback position as if it was a dinosaur. Very few teams actually utilize the position as part of their offensive scheme. However, teams that are good at running the ball usually have a fullback on the roster. The fullback can be a very big part of an offense if they have the versatility to contribute in different ways. This is our list of the top 5 fullbacks for the 2014 draft.

Trey Millard is a versatile player that does it all for the Oklahoma offense. He does a good job as a lead blocker, has good hands to help out in the passing game and can even run the ball when he is asked to do so. Millard has career totals of 413 rushing yards, 593 receiving yards and 11 touchdowns. He has a career average of 5.4 yards per carry and 10.2 yards per reception which are exceptional for the fullback position. There have been rumblings that Millard may also line up at tight end in an effort to increase his draft value and help out the Sooners offense. He has also been working on his in-line blocking skills. Millard had 30 catches for 337 yards and 4 TD last year. At 6’2”, he doesn’t have the ideal height of an NFL tight end, but he could be very productive as an H-Back. Millard is also an excellent special teams player which will also help him as he tries to make it at the next level.

Ryan Hewitt came into his own once quarterback Kevin Hogan took over as the starter for the Cardinal. Hogan is very good on bootleg and waggle plays and many times he is looking for Hewitt. In three years, he has 50 receptions, but I look for those numbers to increase this year. In the last 5 games of 2012 (with Hogan at the controls), Hewitt had 11 receptions for 110 yards and 1 TD. Hewitt does a lot of the dirty work that allows Stanford to move the chains. He is a good short yardage runner that runs behind his pads and inflicts pain on the tackler. Stanford loves to use multiple tight ends and fullbacks and Hewitt’s talents go very well with that type of scheme.

J.C. Copeland is a 6’1” 270 pound former defensive lineman. Last year he converted to fullback and he made the transition look easy. Copeland takes pride in pancaking defensive linemen and he has surprisingly nimble feet for a man his size. The Tigers like to use him running the ball in short yard situations and he had four rushing touchdowns. Copeland sets a tough tone for the LSU offense. He made a name for himself against Alabama when he caught a swing pass and rumbled 42 yards down the sideline while throwing tacklers off of him. Copeland is the kind of player that needs to dial back his intensity a bit. At times he will let his emotions and physicality get the best of him, but with some work I don’t see that as a problem. Coaches like to have that problem with a player.

Jay Prosch is a transfer from Illinois. The NCAA did not require him to sit out after the transfer because he wanted to be closer to his mother who had cancer and later passed away. He was very close to her and he was her pillar of strength as she dealt with her illness. Prosch is a person of deep faith who has dealt well with the adversity in his life. He is a player the coaches love and refer to him as a man’s man. Prosch treats everyone with respect and is very popular in the locker room. He is a very tough lead blocker and he protects the quarterback well. Jay Prosch is a throwback to another era of very tough football players that were also respectful. I’m sure NFL teams will love him once they get to know him.

Chad Abram converted from safety in 2011. He hasn’t gotten much action, but with Lonnie Pryor moving to the next level, this is Abram’s chance. Jimbo Fisher believes in using the fullback and Abram should get an increase in playing time. Abram is also a standout special team player for the Seminoles. He has shown a knack for lead blocking and when he got a chance to run the ball, he showed good power and burst. Abram has the kind of athleticism you would expect from a former safety. Fisher says that Abram may have the best hands on the team, so expect him to be used in that capacity also.